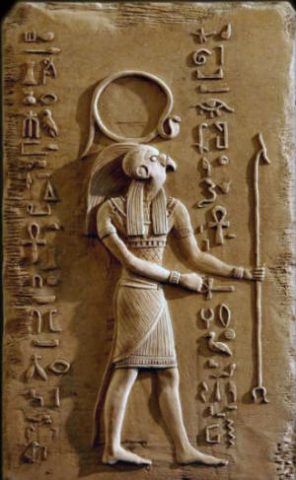 The book of adoration of Ra in west, is a religious text dating back to the beginning of the 18th dynasty and describing the divine mystery of sun regeneration.

Ra is the Whole:
“The unique god who splits into a million gods, and every divinity derives from him”
“Ra is he, whose forms are his becoming, when he takes the shape of his great Disc”.

In New Kingdom theology Ra is the god who created himself on his own and gave life to earth and heaven.
After a short introduction, the Litany starts with 75 invocations which the pharaoh had to know and invoke in order to join Ra.

Every invocation was a quality or a manifestation of the god.

These invocations used to be enunciated in front of 75 pictures painted on the tomb walls at the entrance of the first corridor, or statuettes in sarcophagus chamber. Ra is named with his 75 names, which are his forms (iru) and which are embodied by the various gods.

For example, Ra takes the form of heaven, that is, Nut.

“Praise to Ra, supreme power, supreme sum of everything within him. You are the body of Nut”. The first 10 invocations are about extreme limits of life and death.
Then comes the creation with the form of god Atum, the whole, Khepri, the coming into existence, Shu, earth, Tefnet, dampness, Geb, earth, Nut, heaven, Isis and Nephtys, the two sisters, and Horus, the young symbol of the new cycle.

Others invocations give prominence to the “water” element of Ra: the god identifies himself with Nun, the primordial Abyss whence he comes, and creates mankind with the tears falling from his eyes.

“The divine eye”, an epithet of sun and moon, is cited, and other invocations highlight the two aspects of Ra, the solar and the osiriac one. Ra is considered a bird visiting his own forms in the 75 caves of the Duat, and is implored to lead the dead person towards the two forms of the hereafter, towards the hidden Osiris’ chamber, and to prepare his rebirth.

After saluting the gods of the caves, the sovereign, already judged by the divine tribunal , is called “he who hits his enemies”.

Then comes another prayer through which Ra is implored to identify the pharaoh with himself, to lead him to the Underworld and to protect him from gods tormenting the bas in the Duat. King’s rebirth is identified with Ra and Osiris, who is born from the bovine goddess Mehet-ueret.

While gods praise the king, goddess Hereset prepares to welcome him and with the help of Ra and Osiris leads him into Osiris’ sanctuary, where Duat mysteries are revealed to him and he gets compared to the two divinities with the name of “son of Ra, the new Horus”. Now the sovereign rests in Duat and is the successor of Ra, and also the mysterious “bennu”, the blue heron.

He rests “in heaven, in the fields of Ra”, and “on the horizon, in the Rush Fields. He crosses earth like Ra and pronounces judgements like Thot.

After another invocation to the West, the ritual ends with the proclamation that the dead person is in heaven and on earth:
“His ba belongs to heaven and there he rests, his body is on earth, among the gods”
“The walk of the king is like the walk of Ra… he comes into existence as Khepri does.
He lives in what you live by, in truth, in truth”.

There are two litanies:
the “great Litany”, written on the walls of the first corridor of many royal tombs dating back to the 19th and 20th dynasty.
The “small Litany” contained 74 forms of Ra and a shortened text, and according to researcher H. Grapow it was the base whence the other version was developed.

In the tomb of Thutmosis III, a shortened text and 74 forms of Ra are painted on the pillars of sarcophagus chamber.
The “great Litany” appears in the tombs of Sethi I, Ramses II, Merenptah, Amenmesse, Sethi II, Ramses III and Ramses IX in the “Valley of the Kings”, and in the Temple of Ramses II at Abido.