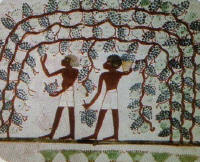 Great consumers of cow milk (irtchet), the Egyptians didn’t disdain goat milk or sheep milk.
But the most appreciated drinks were wine and beer. The wine (erpi) was known during the Ancient Reign and was used only by the richest classes, in time it became a common drink for all the people.
Usually it was mixed with honey and fragrances, many kinds of grape were used.
During the Ancient Reign six different kinds of wine were known: red, white and black.
In the New Reign the cultivation of the rine increased remarkably, the quantity produced, which was enormous, was preserved in carefully sealed jars.
The most famous wines were the marcotic, the sabennitic and the teniotici, so called from the place where they were produced.
They were labelled as “doc” products and on the jugs there was the producers name, the quality and the year it was bottled. During the great banquets, the wines were mixed among themselves in particular siphon vases.
Wine wasn’t used only for celebrations, but it was daily used also by peasants and workers who usually carried it in small decanters from which they drank during their work.
There were also imported wines, mostly from Syria.
Another wine product was the shedu, a kind of highly alcoholic liquor. milk and wine were also destined to the cults, during the offers to the gods, and to prepare medecine.
Beer (henket) was produced with barley and wheat, lightly sweetened with dates and fermented, but it couldn’t be preserved for a long time and turned sour very easily, in spite of the fact that it was kept in hermetic closed jars.
It’s probable, that the ancient Egyptians, also produced a wine with dates.