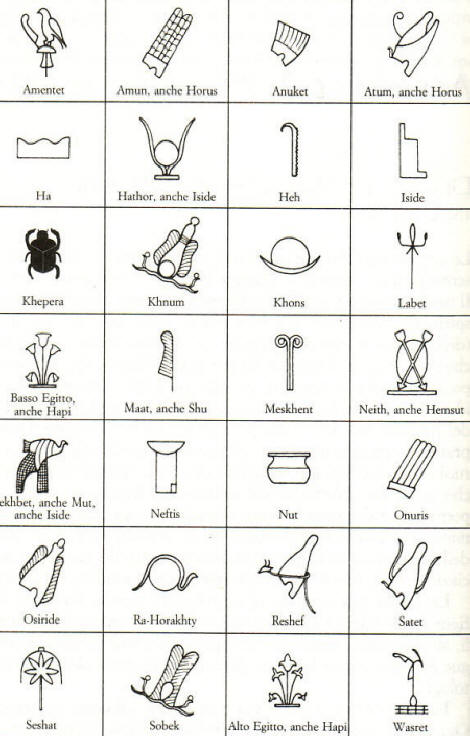 The Egyptian crowns worn by the kings defined the pharaoh’s status in a certain moment of time.

The role could vary from the political one (head of the State), to the spiritual one (priest) to the moral one (teacher).

In the official representations, the pharaoh is often portrayed as he holds to his chest, his crook, the heka sceptre and the scourge ( nekhekh or nekhekhat) Osiris’s symbols.

The symbolism is evident: the pharaoh is the shepherd of his people, he protects them with the scourge and he guides them with the crook. Other symbols of the king’s power were the kherp sceptre, originally a cylindrical club which appeared as a battle weapon in the knife of Gebel al-Araq at the end of the pre-dynastic period and the khepesh which, in the New Reign was given by Amon to the sovereign as a reward for a victory.

The word sceptre defined many signs of the divine power and royalty.

Uas, the club which on top had a stylized head of a greyhound that evoked the animal sacred to Seth, and ended with a fork, was the scepter used by the gods.
Uadj, the stylized stalk of papyrus, similar to a papiriform column, was the goddesses’ magic scepter that symbolized the vigor and the eternal youth.