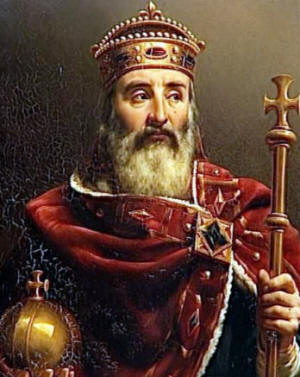 Charlemagne (768-814) was the greatest sovereign of the Middle Ages. Strong and modern-minded, he changed the look of Europe within a few decades.

Rushed to rescue Pope Adrian I, he long besieged Desiderius, the last king of Longobards, forcing him to surrender in 774.

He prepared several expeditions in Spain against the Arabs to strengthen the Frank border.

He led long and hard battles against Saxons and Bavarians and subdued the whole territory of today’s Germany.

He went even farther, against Danes and Avars, the inhabitants of the present Hungary. By the end of the 8th century, the reign of Charlemagne extended from Pyrenees to rivers Elbe and Danube, from the North Sea to the Adriatic Sea.

With the creation of this Empire,

Charlemagne put an end to the age of barbarian kingdoms

the so called Early Middle Ages were closed, and another time called the High Middle Ages began.

He split the conquered territory into wide areas called marches and dukedoms and respectively ruled by a margrave (or marquis) and by a duke, and in minor areas called earldoms, ruled by an earl.

Charlemagne organized the bureaucracy of his Empire by appointing his representatives as functionaries and watching over their activities through a network of inspectors called “missi dominici”.

Besides, he used to move together with his court from end to end across his conquered reign, even if in the last years of his life he chose Aachen as his residence without creating a veritable capital city.

Under him Europe began rising from poverty and ignorance, and in fact he wanted schools to be built everywhere. Historians, grammarians, Latin scholars protected by him anticipated that enthusiasm for studies which would have later characterized the Renaissance age.

Charlemagne also boosted agriculture and trade. To make the traffic in his great Empire easier he built bridges and roads and organized the navigation on the great European rivers.

Scottish and Anglo-Saxon kings recognized his authority on Western Europe and Italy, the Byzantine Emperor paid homage to him and even the Caliph of Baghdad sent him gifts.

But the most important recognition came from the Church:

pope Leo III, in fact, recognized him as the patron of Christianity and, in the Christmas night of year 800 he crowned him emperor of the whole territory he had conquered, which was called “Sacred Roman Empire”.

Charlemagne never imposed the same laws to the people he subdued.

The laws, called capitularies, would be presented to the emperor in a noblemen assembly, discussed and then approved by him.

Apart from such laws, the old customs and institutions of the several people were respected and this allowed the birth of the various European nation, which had already taken their shape after Charlemagne’s death.