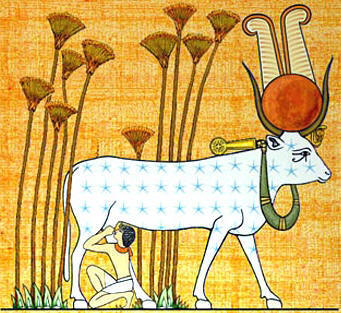 The goddess Hathor, in time, absorbed in herself the many characteristics of the local divinities.

This is why she is represented in the most different ways, in her role al lady of the sanctuaries or protector of one or of another nomos. Probably Hathor was initially the goddess of the sky, but she wasn’t represented as Nut, but as a cow with a starred fur.

In Ra’s cycle, she appears as the eye in the sun, that assuming the shape of a lion, of the goddess Sekhmet, destroys men.

In her feline aspect she becomes “the flaming one” who devours the virtues of the fire, the “golden flame”, the devouring fire of love, the goddess of Joy and of Pleasure. We find her also represented as the “golden Cow”, Horo’s loved one, she who “Ra loves”, the “Golden who is in the ponds full of birds, in the places of her pleasure”.

Goddess of fecundity, Hathor lives in the trees and she is the “lady of the Sicomoro in the South”, in Memphis besides being the “Lady of the West”, so the lady of the dead. It isn’t known why the Egyptians made her also lady of “Punt”, of Sinai and of byblos, but certainly in those areas the goddess must have been identified with some local divinity.

The hymns in fact, tell us that his “fame has reached the island in the middle of the sea (Egeo)”.
To the goddess the “sistro” was consecrated, that accompanied her when she appeared as a woman with the head of a heifer.