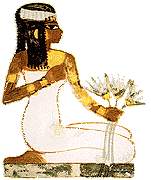 The Egyptian woman was considered “the lady of the house”, if she was a woman of the people, she took care of the grinding of the cereals and of the preparation of beer, of the spinning and weaving of linen.

If she belonged to nobility, instead, she supervised the servants’ work..

A woman shared social life with her husband and had a patrimony that she gave as a dowry to her husband, but that a contract gave her back a part of it, in case of widowhood.
For the law the husband had to support his wife. Her legal position was not different from the man’s one.

She took care with her husband, of the children’s education and particularly she took care of daughters’ education. She got married very young, often with a man older than herself.

Usually the marriage was decided by the parents.

The bride and the groom could be consanguineous and belonged to the same social class. He who married a slave, was illegal and their children were considered slaves. Inside the harem, the woman apparently had many comforts, but actually she was confined.
The marriage was simply a party with the two families and ended with the bride moving to the husband’s house.

There were written contracts only in a late age. In case of divorce the husband paid alimony to the wife equal to a third of the quota defined in the initial agreement. The main reasons for divorce were adultery and sterility. If the man’s infidelity was tolerated , he could take a second wife, on the contrary, if the adulterer was the wife, she was whipped and had an ear or her nose amputated. After death a woman had the right to a tomb of her own, equal to a man’s one.