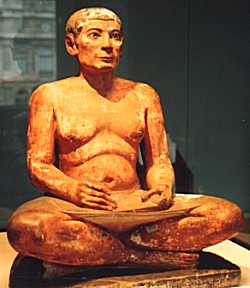 The figure of the scribe was born with the necessity to make precise inventory of the great mounds of food stuffs that went in and cut of the pharaoh’s house. The training time for the scriba was long, it went from the copying of the text in hyerogliphic cursive, to the compilation of miscellany from literary works.

Only the most gifted students, those who learned the hard art of the monumental hyeroglyphic, the most complicated one, were able to reach the court.

The scribe, aware of his role, jelously kept the secrets of his profession and hand them down from generation to generation.

His tradition working tools were a case with hollows to keep the ink past, a little rope, and hung, a small container that held the water to dip in and clean the brushes.
The scribes wrote on the papyrus, which was small to gather and transport and that, properly worked, made sheets both resistant and soft.

The scribes then glued them together if the text were long.

It’s useless to say that the scribe profession was the hardest one and the most desired one in all Egypt.

This hyerogliphic shows the scribe’s equipment: the tablet with two hollows one for the black ink and the other for the re ink, the strap they attached to their shoulder, the cane pen and the water vase.

In the Egyptian language this sign represent the sound “sesh”.

If its accompanied by the figure of a man, it means “scribe”, while if a rolled papyrus appears it means “to write”.