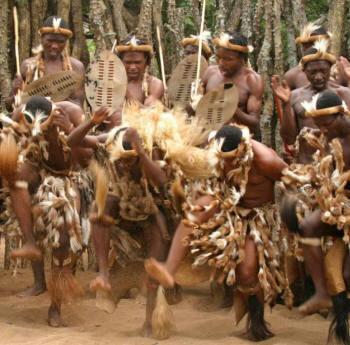 King of Zulu and a great strategist, he is remembered as the “African Napoleon”.

The life of king Shaka is known to us thanks to tales and legends often discordant with each other.
Born around 1787 near Melmoth ( a province of KwaZulu-Natal), he was probably the son of a Ngoni Senzankagona chief and of Nandi, the daughter of a Langeni chief.

When he was six he was chased away by his father because of the death of a sheep he was looking after, and his mother, who stood up for him, was chased too. The following years were a succession of wanderings through the kraal (farms) of other landlords.

Shaka will keep the memory of those years, which will leave their mark on him and will drive him to take his fierce revenge.

His long wanderings came to an end around 1803, when he and his mother were given hospitality by an aunt belonging to king Jobe’s emDletsheni clan, allied with the powerful Mthethwa tribe.

Already at the age of sixteen he was a valiant warrior, and at the age of twenty-three he passed from iNtanga ( peer group) to iziCwe (regiment).

He distinguished himself for his courage and his fight skills, and got even appointed general.

His name had already become a legend, and his “Beinahmen” platoons were called “the winners over the thousand”.

At his father’s death, in 1816, Shaka killed his brother with the help of Dingiswayo ( the chief of Mthethwa) and established a regime similar to Dingiswayo’s one.

Shaka modified his tribe’s fighting technique; he had a short spear with a long head (ilkwa) and a heavy leather shield made. He would hook enemies with his left hand and stab them in the ribs with his right hand.

The training of Shaka’s men was very hard: barefoot fighting and fifty miles running on hot rocky soil within less than twenty-four hours. The iron discipline and the face-to-face fighting have been compared by many scholars with the ones of Spartan army.

He divided Impis into four groups, which during battles would form a bull head. The first detachment would be the “thorax”, in touch with the enemy, the second and third one were the “horns”, expected to surround the enemy preventing their withdrawal.
The fourth group was made up of reserves. .

Shaka would observe the formation from above and sent his orders through fast messengers.

The victorious king used to offer the survivors the possibily to join his army, and new recruits would have been then considered authentic Zulu.

It was thanks to Shaka that the way of warring in Africa changed, and after nearly two centuries since his death Zulu keep on using his tactics to defeat their enemies.