Because the world had been created by the vital power of the universe, the eternal spirit, had to return, when his course on earth was over, to order and harmony.
Both the sacred story that lets Osiris die and born again, as the daily actions of the sun-god who at sunset is overwhelmed by darkness but the day after triumphantly resurrects, represent for the Egyptians the guarantee of faith in the survival of the soul after death. Nevertheless, to let this happen, the soul needed that the body should not be corrupted or dispersed. In the most ancient times, a real life after death was considered the pharaoh’s privilege and the subjects hoped that someway the pharaoh’s immortality should reflect upon them. Later, at the end of the Ancient Reign, survival became a right for all those who had a tomb and could afford the funeral rituals.
The first preservation of human remains in Egypt must have been casual. In the cemeteries of the pre-dynastic epoch, which were not very deep pits where the dead person was put in the fetal position, the very hot and dry climate, dried naturally the bodies, but it’s not known if survival in the other world was strictly connected to their preservation. When the bodies began to be put in tombs with artificial coverings, initially they were wrapped in linen bandages and covered with compressed plaster and smoothed to let it have the shape of the body underneath; when the plaster was dry, the external shell was painted (often in green, the color of rebirth) and to the face the dead person’s features were given. During the Middle Reign the technique for the mummification improved and it reached its best and definite results in the New Reign. There were, in a late epoch, also useless attempts to give back to the body its natural characteristics with stuffing of linen and other materials, but the decomposition of these supports caused right what the embalmers tried to avoid. There are no illustrations nor inscriptions that inform us about the mummifying procedure. Erodoto’s description of it appears rather reliable. Erodoto describes three different kinds of mummification that had different prices:
Simple washing and purifying, an injection of corrosive liquids
foto1
The embalmers fill their syringes with citron oil and they fill the dead person’s abdomen with it, without making any incision, simply injecting the liquid through the anus and making sure it didn’t come out. Then they embalm the body for the days prescribed. The last day, they let all the oil they had injected come out; this oil is so strong that it takes with it all the insides and the intestine from under, so at the end only skin and bones are left.

Incision and extraction of the organs

It foresaw, through an incision on the abdomen, the extraction of the intestines, of the stomach, of the liver and the lungs. The abdomen was cleaned with palm wine and toasted spices, then the abdomen was filled with pure grinded myrrh, cassia, and other spices. The extracted bowels were put in a case, divided inside in four parts with covers in the shape of human heads. Later they used the canopy vases which always had four heads: in the ramesses period, they represented Horus’s four children. Daumutef, the vase with the head of a jackal, held the stomach; Quebehsemut, the hawk, kept the intestine; in the vase with a human head, Ismet’s one, there was the liver and in Hapi’s one, with the head of a baboom, the lungs were kept. The canopy were often made of lime and put inside the tombs in a proper chest. The kidneys, often considered the place of emotions, and the heart, that the dead person needed to be judged, were put back in the empty body. Even the brain was removed through an incision on the skull or through the nostrils with hooks and substituted by a metal cap. The bowels were embalmed like the body and wrapped separately in bandages. The body was then put under mounds of dry natron, a natural salt that was abundant in the bed of the dried lake in the Western Delta (the Wadi el-Natrun of today); natron is essentially composed by sodium chloride and it has a high percentage (17%) of sodium bicarbonate, indispensable for the success of the procedure. This salt absorbed the liquids in the body that, after 70 days became a solid shell that didn’t go into decomposition. When the mummy was ready it was purified and the priest wrapped it in bandages. Linen bandages were used, often the same ones they had in their house; only for the pharaohs, his relatives and for the high dignitaries bandages woven purposely were used. First the limbs and articulations were wrapped and then the whole body; the arms were wrapped around the body and the legs were put together. While they put the various layers of linen, some amulets were also put in precise places and the priest recited the formulas to assure the efficacy of the procedure. Often, after the bandaging, a mask was put on the dead person’s face: of silver and gold for the kings, of painted paper-pulp, that is papyrus and linen mixed with plaster, for the lower classes 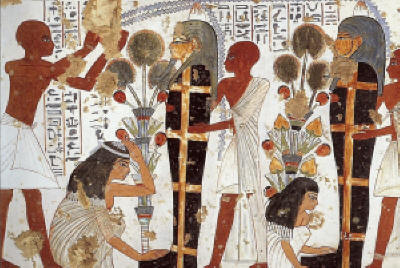 The mummy was then put in a painted anthropoid coffin, sometimes put inside other ones; for the higher social classes and for the kings even a rectangular stone sarcophagus was used. During the bandaging, the placing of the coffin and the burial, a lot of precious ointments and perfumes were poured, which then formed that characteristic hard substance similar to pitch. The mummy inside the coffin and with a baldachin above that represented the sky and the stars, was brought on a sled toward the tomb. A funeral procession followed it with food and drinks, furniture and personal objects to furnish the funeral chambers, while the woman uttered funeral laments. At the entrance of the tomb there was the so-called “opening of the mouth” ceremony; the coffin was vertically lifted, so a priest could gently touch, with a miniature carpenter’s ax, the points that correspond to the eyes, to the nose, to the lips, to the ears, to the hands and to the feet as if to lift the wood and let the senses function. The ritual sentence was .” My mouth is open! My mouth is split by god Shu (god of the air) with that metal spear that he used to open the gods’ mouths. I am the Powerful One. I will sit besides she who is in the great breath of the sky.” (Book of the Dead, Formula 23). The coffin was then put down in the tomb and around it they put the funeral objects. At this point the entrance was sealed with rocks and mud. On the western hills in Luxor an oval mark was impressed on the plaster, with Anubi laying on nine tied prisoners, and often among the rocks some terracotta cones were inserted with the names and the titles of the dead.