Cleopatra (Alexandria in Egypt 69-30 BC), the last queen of the Tolomeo dynasty; reigned over Egypt as Cleopatra VII from 51 to 30 BC and has passed to history for her love affairs with Julius Cesar and Marc Anthony.
Pharaoh Tolomeo XII Aulete’s daughter, at her father’s death in 51 BC, she ascended to the throne with her twelve year old brother Tolomeo XIII, on the condition that they got married, as it was custom among Egyptian pharaohs. In the third year of reign, Tolomeo XIII, encouraged by his councilors, assumed on his own the government and sent his sister in exile. Cleopatra took refuge in Syria, where she skillfully claimed her rights until Julius Cesar arrived, he defeated the Egyptians on the Nile during the Alexandria war (48-47 BC), he killed Tolomeo and settled Cleopatra on the throne, who in the meantime had become his lover.
According to the Egyptian custom, Cleopatra had to reign with her eleven year old brother, Tolomeo XIV, who she had to marry. Once the stability of the Egyptian government was established, Cleopatra moved to Rome, where she lived as Cesar’s lover, from whom she had a son, Cesarione.
After Cesar’s murder in 44 BC, she returned to Egypt, where, according to some sources, she poisoned Tolomeo XIV and settled on the throne her son Cesarione.
When the battle of Filippi (42 BC) put an end to the civil war that followed Cesar’s death, Cleopatra became attached to Anthony, she became his lover; she had a deep influence on him, to the point of giving credit to the rumor that the two of them wanted to create an oriental reign in opposition to Rome. In 40 BC, Cleopatra had by Anthony, two twins and four years later they got married and had a third child. In 34 BC, after a victorious campaign, Anthony celebrated his triumph in Alexandria and publicly announced the division of the empire, already Alexander Magno’s, between Cleopatra and his children. When the news reached Rome, Cesar Ottaviano destroyed Cleopatra’s fleet, and in August 30 BC, when Alexandria was taken, Anthony and Cleopatra committed suicide (according to the legend, the queen let herself be bitten by a snake). Cesarione was killed by Ottaviano and Egypt passed to the hands of Rome, as the emperor’s personal property. 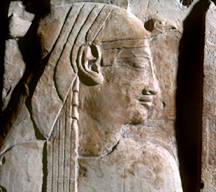 Fragment of a bas-relief