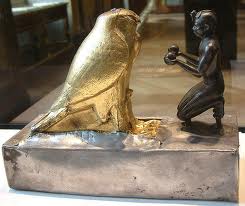 God Horus identifies, both in Egypt and Nubia, with various local divinities: as a solar divinity he is Haroeris, Harakhthe, Harmakis, Horo of Behedet.

As Isis’s son he is Arpocrate (child Horus), Harsiesi, (Isis’s son) Harendotef (Horus his father’s avenger).
Horus is above all the dynastic god, he is “he who sits on his father Osiris’s throne and in whom every living sovereign identifies himself”.
The origin of this god is obscure, because there were many sanctuaries and in each one of them he had a different name. It seems that at the beginning he existed under the shape of a falcon, that in the texts of the Ancient Reign was identified with the “Great God” and considered God of the sky and so assimilated to an animal that lived in the sky.
Parallel to the political union of Egypt, there was also a union of the Gods and Horus was identified with Ra in the form of Ra-Hrakhte (Horus of the horizon) represented in the tinita epoch by a man with the head of a falcon, that seems was Horus of Letopolis (II nomos of the Delta) called Hor Khenti irti “Horo who presides over two eyes, that are the sun and the moon”.

In Behedet (Damanhur of today, in the XVII nomos of the Delta) we find Horus called the Ancient ( or the Great) Horoeris confused with Horus of Chemmis called the Young (or the child) Arpocrate.

This Horus, Isis’s and Osiris’s son, had a determining role in the fight between Seth and Osiris.
An old legend that is on the Texts of the Pyramids, tells that Isis, under the shape of a vulture alighted on Osiris’s body, conceived Horus and brought him up to avenge his father’s death.
Horus, when he was an adult, provoked Seth, who reacted tearing off one of his eyes during a battle, but Horus got it back, he defeated Seth and he evirated him. At this point the God’s assembly settled Horus on his father’s throne, while Seth was condemned to carry Osiris eternally.
When Egypt was divided again at the end of the pre-dynastic period, Horus remained the official divinity of Upper Egypt, in Nekhem (Hierakonpolis).
In Upper Egypt there was another sanctuary dedicated to Horus, in Edfu.
The pharaoh was considered Horo’s incarnation and this legitimised his reign.