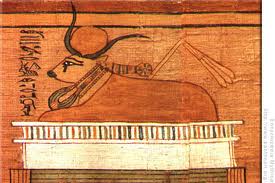 Since the I dynasty the cult for an Apis Bull (Hop in the local language) is alive in Ancient Egypt, as a rural divinity simbol of the generation and fecundating force.
Worshipped in Memphis, it was soon assimilated to Ptah, patron of the city, of whom he was considered the incarnation. To Ra, Apis owes the solar disk put, with theureus between his horns.
The Apis priests in Memphis, known during the ancient Reign as “Apis’ batons” searched the country fro the bull with the divine mark on it, a mark that had to be present on various parts of the animal’s body. The purpose was to make him the reigning Api’s successor. When an Apis died, he was buried according to a precise ritual, after he had been mummified.
After the funeral ceremony, he was lowered in the underground part of the Serapeum where he reached the god’s previous incarnations. Then a new Apis was put on the throne, which was celebrated.  After it was showed to the people, the divine bull was daken to the sanctuary, where he lived with his harem of heifers, and didn’t go out except for processions that required his presence. Besides receiving offers by the followers, in the Apeion, the bull-god also gave responses as an oracle.