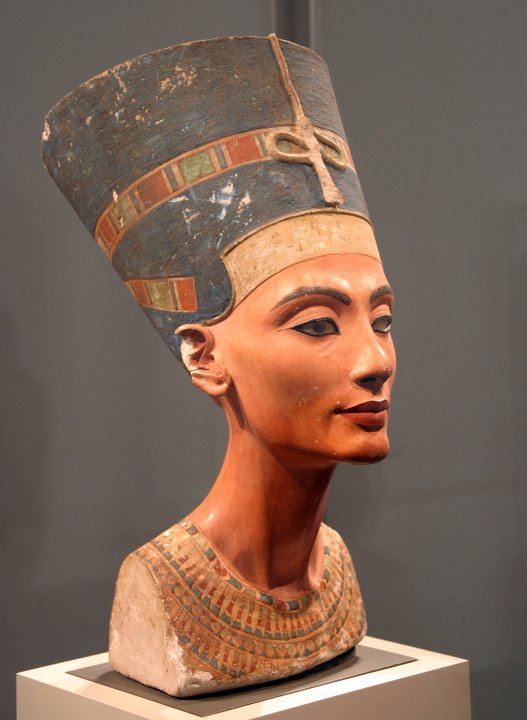 NEFERTITI (XVIII dynasty).
According to the last interpretations, Nefertiti is considered Ay’s daughter, who was Teie’s brother, nephew of Yuia and Tuia, that is Amenhotep’s IV cousin.
Nefertiti and her husband, formed a very politically united couple.
In the V year of reign, when the sovereign changes his name to Akhenaten, Nefertiti receives another name: “Nefer-nefru-aten” (Aten is perfect in her beauty).

It seems that after the XII year of reign, she had a less important role in the court, probably for Kiya’s presence, another of Akhenaten’s bride. Nefertiti died during Akhenaten‘s XIV year of reign. 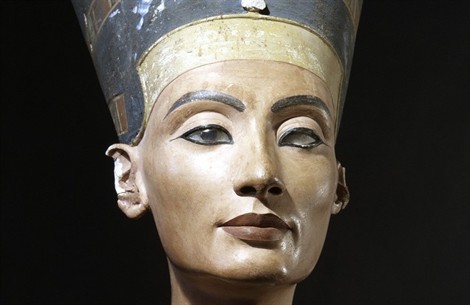 Some british archaeologist think they have identified the body of one of the most famous queens of ancient Egypt, whose beauty-handed down by one of the most beautiful sculptures of ancientness – is legendary: Nefertiti, pharaoh Tutankhamun’s stepmother, was one of the most power women of her time. It’s written on the Sunday Times web-site.
After 12 years of researches, the studios have concluded that the mummy, not very well kept, found in the Valley of the Kings, is really the one, 3500 years old, at the mythie queen. Joann Fletche, who is a member of the group of researchers of the York University, has reported that the examination on the mummy has allowed to clear that it goes back to the eighteenth dynasty, and was arranged in the typical way of the royal mummies.

Mummy of Nefertiti: could be a man

The mummy that was thought belonging to the Egyptian queen Nefertiti could be a man’s one. Zahi Hawass, English Egyptologist of the supreme archaeological council in Cairo, has doubted the important find of the York university, that had announced in June the discovery of the mortal remains of the queen famous in the ancient world for her beauty. The hips of the mummy are two tight to belong to a woman who was mother six times.
Joann Fletcher, an expert in mummification in the York university, had communicated the umburial of the mummy of the powerful Egyptian queen, completed by her group in the Valley of the Kings in Luxor. Discovery Channel had then advertised the finding in a television program, whitout caring about the doubts on the sex of the mummy expressed by the general secretary of the supreme archaeological council, Hawass.
“I’m sure that the mummy does not belong to a woman”, the expert had immediately declared, who had 35 years of experience. On the other hand the same study begun by the archaeological council in the Egyptian capital, by Don Brothwell, at the head of the expedition of the York University, recognized some “uncertainties about the sex of the mummified person”, though concluding that it was a woman for the absence of male sexual organs. The connection to the powerful queen at the guide of the reign beside her husband Akhenaten, from 1379 to 1362 BC, was immediate.
Hawass had finally cancelled every doubt, explaining that the double piercing on the ear of the mummy, in that epoch, was commons both for men and women, in a period different from the one in which Nefertiti had lived. In those years it was more common for men. “In particular – the Egyptologist had explained – no queen used earings or pendants at the ears.
Numerous discordant elements were handed down in history. According to the tradition, the beautiful queen died at 35 years old, while the remains found belong to a person between 18 and 30 years old. A more meticulous analysis on the corpse has closed the question: the hips of the mummy are, in fact, too tight to belong to a woman who was given birth six times”.