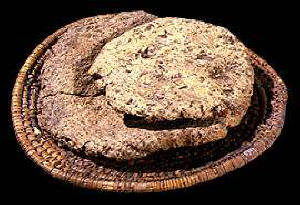 In Ancient Egypt the basic diet of the people was very simple.

Bread and beer were the food and the drink mostly used and they were also the pay with which the pharaoh paid the workers, as money didn’t exist. It seems there were about thirty or forty kinds of bread in different shapes, triangular, round, oval, exc.. and ingredients, barley, wheat, The rests of mummified round loaves have been found in several tombs, like the one of Mentuhotep II in Deir el Bahari. Even a lot of fish was eaten, of fresh water and also of salt-water: carps, eels and other kind of fish. From the breeding and the hunting in the marshes they had ducks, gooses, pigeons, quails and pelicans and their eggs.

They ate swine and sheep meat, and rarely cattle meat.

The meat was cooked boiled, roasted or on a spit. The alimentation was integrated with dairy products, vegetables and fruit. The Egyptians had three meals a day. The main meal was deinner. At the table they didn’t use a knife (that existed) nor a fork (that was totally unknown): they put the food in their mouths with their hands. Pots and pans were made of crock, plates, bowls and cups in terracotta. Nevertheless the kings and the court had services in gold or silver.

The meal was consumed seated on mats and pillows. In the New Reign, the well-off people introduced the use of sitting on chairs in front of high tables. In the rich houses the food was served by many servants and young boys And the music and fascinating dancers never missed.

As said the bread had a fundamental role in the alimentation.

It was cooked outside, in clay ovens that were in the yards in some houses. It was then eaten simply or enriched with fat and eggs, or sweetened with honey and fruit. There was also a kind of soft bread on which you could spread honey or a kind of date marmalade.

But in the bread there were almost always unwelcome ingredients: sand, little rocks and insects. The fine desert sand could not be avoided so it got mixed in the flour and caused a premature erosion of the teeth.

The bread that was made in the III millenium BC, was very similar to the traditional round one, that is still today made by the peasants in Upper Egypt, and that is called “aysh sham” or bread of the sun.

On the pharaoh’s table, there was besides the bread, the “ ful medames”, the national Egyptian plate, which were small beans, that had been boiled for hours and flavored with oil and various spices.