The book of the dead

The book of the Dead is a collection of funeral texts of different epochs, that includes magic formulas, hymns and prayers that, for the ancient Egyptians, guided and protected the soul (Ka) in his journey through the region of the dead.
According to the tradition, the knowledge of these texts permitted the soul to drive away the demons that hindered his way and to overcome the tests put by the 42 judges of Osiris’s tribunal, the god of the hells.
These texts indicated also that the joy in the afterlife depended whether the dead person had or not led a virtuous life on Earth.
The first funeral texts we’ve known were engraved in hieroglyphics on the inner walls of the pyramids of the kings’ of the V and VII dynasty of the Ancient Reign, and were called the “Texts of the pyramids”.
In the first Intermediate period and in the Middle Reign it was custom to paint these texts on the sarcophaguses, a custom from which comes the name the “texts of the sarcophaguses”.
In the XVIII dynasty they were written on papyruses, many of which were from 15 to 30 meters long, with colored illustrations, put in the sarcophaguses.
This great collection of funeral texts has reached us in three different versions: the eliopolitan one, composed by the priests of Anu’s Order which included texts used between the V and the XII dynasty; the teban version, used from the XVIII to the XXII dynasty, and the saita version, used from the XXVI dynasty, around the 600 BC, to the end of the dynasties, in the 31 BC.
The title “The book of the Dead” is misleading; the texts don’t form a unitary work and they don’t belong only to one period; the Egyptologists usually call this way the last two versions.

Embalming of Osiride
Anubi I bend on the mummy 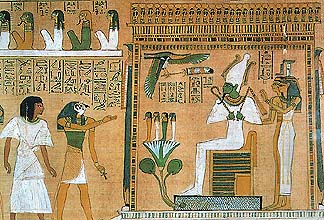 The mummy of forehead to Horus

Opening of the mouth

Because it was believed that, after leaving the tomb, the souls of the dead were in the power of many dangers, the tombs all had a copy of the Book of the Dead, an actual guide for the world of afterlife.
After the arrival in the reign of the dead, the Ka was judged by Osiride and by 42 demons who helped him. If they decided that the dead person had been a sinner, the Ka was condemned to hunger and thirst or to be torn to pieces by horrible tormentors; if instead the decision was favorable, the Ka went to the heavenly reign in the Yaru fields, where wheat grew very high and the existence was a celebrating version of life on Earth. All the necessary objects for afterlife were so put in the tomb. As a payment to the other world and for its benevolent protection, Osiride asked the dead to do things for him, such as working in the wheat fields. Even this task, though, could be avoided putting some statues, called ushabti, in the tomb to let them take the dead person’s place. 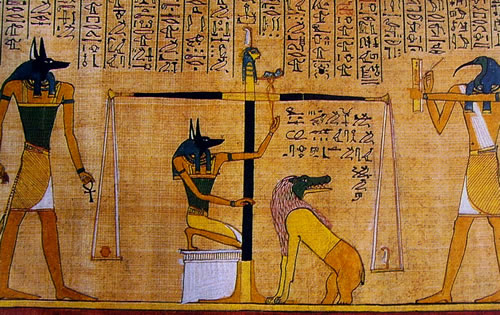