The Egyptian goldsmith’s craft reached a remarkable skill.
The goldsmiths were specialized in the various techniques to working of the gold ( filigree, gold leaf, inlaid), but the Egyptian jewels are famous mostly for their polychrome, obtained inserting gems, such as the carnelian and the lapislazuli .

They also practiced the tecnique of the niello, which was filling apposite setting with enamel or a vitreous colored paste. Both men and women of high rank wore the necklace called usekh, made by many strings of pearls, or gold chains with many pendants.
The women wore also many bracelets on their wrists, on their arms and on their ankles. A distinguishing sign was the sealed ring, on which there was engraved the owner’s name or formulas of good whishes.
As the paintings in the tombs, even the jewels had a naturalistic taste: floral decorations, figures of real or fantastic animals decorated personal and amulets.
From the XIX to the XXI dynasty, the taste became less refined and the jewels appeared “heavier” with many decorations of glass and faience, with settings and platings.
Moreover, earrings appeared, followed by rings. There were many techniques of decoration, of filigree, of settings, of coloring and of working of the metals; the study of these techniques has influenced a lot the modern jeweller’s art

This example of Egyptian jeweller’s art comes from the pharaoh Tutankhamun’s tomb of the XVIII dynasty, who reigned in Egypt in the XIV century BC.
The jewel is in gold with colored enamel and gems and represents a vulture.

Two bracelets that belonged to queen Ahhotep I.

Another bracelet in gold and lapislazuli that belonged to queen Amenhotep’s I ancestors, with the crowns of Lower and Upper Egypt. 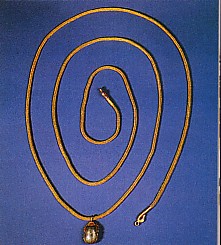 Princess Sithathoryunet’s tiara: a gold band, with feathers and golden pendants, in the front there is the royal cobra.

Jewels that belonged to lady Tjuyu of the XVIII dynasty. It was found in Thebes by the English James Edward Quibell