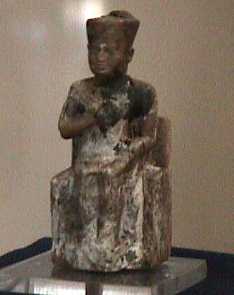 Names: Cheope, Khufu (or Khufwey, according to Gardiner), Suphis, Horo Medjdo
Dynasty: IV ( 2630-2510 BC)
Years of reign: 63 (Manetone); 23 (Canon in Torino) [2606-2583 BC (Torino)]
Historical placement: Ancient Reign 2700-2200 BC.
The name Khufu, in the form handed down by Erodoto, belongs to the historical education of the whole world.
His funeral monument, the great pyramid in Giza, was considered one of the seven wonders of the ancient world, and is also today at the center of countless measurements, hypothesis, different suppositions.
We know little about the great pyramid constructor’s life, except some material proofs of his autocratic power.

The cartouche that includes the name Khufwey ( Khufu’s real name) has been found in various stone quarries, in his family’s and courtesans’ tombs and on some following inscriptions.
But no document contemporary to the pharaoh can boast a genuine historical value, except for the narration of his mother’s funeral, Hetephras, Snofru’s wife, whose tomb was discovered near the pyramid by Reisner in 1925.
There is no serious critic foundation to establish how long Khufwey’s reign lasted: the Canon in Torino gives it twenty-three years, while Manetone, basing maybe only on suppositions, gives it not less than sixty-three

Hordjedef
Khufu’s son was buried in Giza and probably was involved in the conflicts for the succession. His fame comes from his literary qualities; he wrote an essay “Hordjedef’s teaching”, that put him among the most greatest writers, making a cultural model of him. One of the passages of the stories from the Westcar papyrus, shows him while he contacts a magician named Djedi to propose him to do something for him. His prestige was so great that tradition chose him, fictitiously, as the inventor of various chapters of the Book of the Dead, in Hermopolis, discovered during one of his inspecting and inventory rounds